There are three things about crowdfunding you need to know. The first is a fact: the US-based crowdfunding website Kickstarter recently announced that it would be accepting UK-based projects from the autumn. The second is a rather mind blowing prediction: that same site, Kickstarter, has predicted that it will outfund the National Endowment for the Arts in America, by raising $150m in the coming year.

For those that still need proof that crowdfunding has developed from adigital quirk into a powerful finance model, then take a look atKickstarter’s recently published stats page. And that third thing I mentioned? It’s not about funding, but how crowdfunding is changing culture itself.

When crowdfunding first popped up, I was intrigued; it had an obvious, zeitgeisty importance, and not because it represented a technological advance or even because digital fundraising was a new idea. Talk to any savvy fundraiser and they will inform you the Royal Albert Hall was essentially crowdfunded and say: “Was that so very different from ‘donate now’ buttons?”

Ah, those buttons – pure pixelated hope if ever there was. The truth is, crowdfunding is radically different. Why? It has piggybacked on a confluence of technologies and social change, becoming nothing less than a financial harness for the digital collective. It’s new because it gets that hard to define but ‘internety’ thing: a mass yet casual desire to innovate, take control and (most internety of all) have fun doing it.

No longer is online giving all about brain tumours and doing wheezy laps of Hyde Park dressed as endangered species. Charity has been unharnessed from tragedy and uncoupled from institution – it has become upbeat. Set aside the whole ‘globalised collective’ aspect and fun really is the defining aspect of crowdfunding.

You wonder if po-faced art will take a backseat to a movement that seems happy to fund a dinosaur hunt, a giant rideable spider robot and a papier mache replica of the Queen strapped to a barge. Lurking behind these madcap examples are real projects of interest. The internet clearly loves the wacky and instantly ‘gettable’ – will the serious suffer a terminal demotion?

From the moment this infamous statue of Robocop got funded you knew the internet’s sense of humour was going to have a say. Consider that dinosaur hunt: is it possible that a useful scientific trip for students knew a straight bat would fail and had the digital smarts to rebrand?

And will art have to get wacky to get funded? Productions of the Cherry Orchard might be wise to include the odd piece of flying taxidermy, following the lead of the ‘artist’ who responded to the web’s demands bycreating the Catcopter. Behold a dead cat that flies. This piece might actually work on two levels, being both mercenarily viral and a self-embodied comment on internet culture.

The tweedier sections of society and many artists will no doubt feel a certain unease with all this but my feeling is that drawing out the fun to get your art or science project funded is no bad thing. Fun and happiness are deeply underrated as productivity catalysts.

Where else is crowdfunding going? Kickstarter has already blogged about local government interest. Soon it will announce that New York will have its own curated page backing projects that benefit the city –Portland already has one. This natural step into civic crowdfunding, where local citizens raise digital funds to improve public space, strikes me as a terrific development. But it throws up all sorts of issues around the nature of funding versus taxation, as highlighted by blogger Ethan Zuckerman.

And of course, civic crowdfunding isn’t all about Kickstarter. The British site Spacehive has been at it for a while. It deserves mention for two things. Firstly the potential of crowdfunding for cultural dissent and political protest. Was the alternative Jubilee Queen’s head likely to get funded by Arts Council England? It seems unlikely with vested interests in play.

Spacehive’s second feat of note was funding the Glyncoch Community Centre. Take a look at the page and witness the funders involved. As well as public donations, the project received the lion’s share of capital from the local council and corporates like Tescos and Deloitte. To my knowledge, this is the first modern example of what could become the new ‘tripod’ funding model: crowd, government and brands creating capital builds together.

At a time when business and government desperately need a new covenant with society, this is significant. Consider a controversial state-funded project like the Public arts centre in West Bromwich. Had the Public been partially crowdfunded, perhaps the bad feeling that marked its opening would have been deflected by the community’s prior online connection.

And once you create a building, what about long term sustainability? This seems to be where the crowdfunding model falls down. Could it ever move from funding one-hit wonders to a subscription model? My instinct is no, although there are examples of repeat crowdfunded festivals like Peckham’s Bold Tendencies.

Eternal crowdfunding campaigns seem waring. Then again any kind of marketing or grant application is tough, and as blogger Chris Unitt points out, crowdfunding encourages arts venues to focus on audience rather than their local funding rep. No bad thing surely.

That covers the changes in funding. How about that third thing I mentioned? Hold onto your hats and come back tomorrow. This is where it gets interesting.

This content is brought to you by Guardian Professional. To get more articles like this direct to your inbox, sign up free to become a member of the Culture Professionals Network.

via The Mechanical Paradise / Shock of the New / Modern Art & The Machine- YouTube. 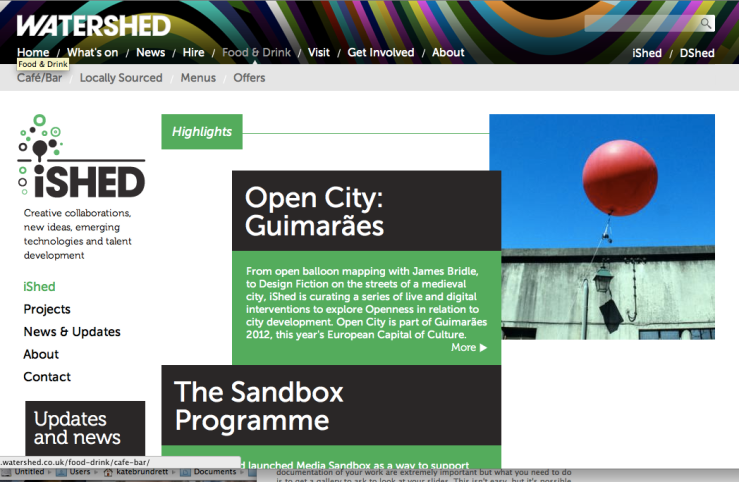 I want one of these in Penrith!

We’re very excited to announce a new project for this summer: a collection of site-specific games spread all across London.

Yes, “all across”: three in each borough, for a total of ninety-nine. 99 Tiny Games. Each one a unique ruleset just a few sentences long, printed on a vinyl and stuck onto the ground or a wall somewhere in London, sitting there, waiting to be played by passers-by.

Some of you may remember the project we ran at the Southbank Centre last summer:Tiny Games, a collection of ten games scattered across the Southbank Centre. (The pictures above are taken from that project.) It was amazing to walk through the site and spot people playing games we’d made up and stuck on the ground, so we’re absolutely thrilled to be able to explore the same idea on a much grander scale.

99 Tiny Games will be running from 28 July to 23 August, as part of Showtime. There’ll be games in bandstands and parks, on paths and tube station walls; on high streets, by shopping centres, under archways, in corners, in squares, by statues and lakes and bus-stops. Everywhere, really.

Thank you to all the boroughs, Mayor of London, the Arts Council, and the London 2012 Festival.